As from the 17th of June, the "Rescue Sheets" database regarding cars on the road can be consulted

14/09/2020
Fire brigade
Civil protection
Equipment
On 17th June 2020, Euro NCAP, the European organization in charge of crash tests on new vehicles, launched the "Rescue Sheets" database. It contains the sheets providing very useful information about cars on the road (where the battery is located, where the cables are routed, which potential dangers the cars represent, ...). Rescuers throughout the whole world will be able to consult this database. And, in the event of a road accident, they can view immediately on a tablet, or even a smartphone, the sheet pertaining to the vehicle or vehicles involved in this accident. Thanks to this database, it will become possible for the emergency services to work more effectively and faster in case of road accident. 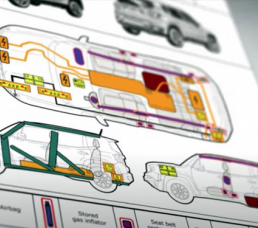 This database is to be accessible free of charge starting from 17th June 2020.

This Euro NCAP initiative is no stranger to Belgium. The former does indeed rely on the implementation of ISO standard 17840, one of the most striking results of CTIF's Commission for Extrication and New Technology, "CTIF" standing for the International Association of Fire and Rescue Services. This Commission is chaired by Major Tom Van Esbroek from the Fire & Rescue Region “Centrum” (East Flanders) and who also works as an expert at the Federal Centre of Expertise for Civil Security (KCCE), under the remit of the Belgian FPS Home Affairs. He is the person who initiated this cooperation with Euro NCAP. Michel Gentilleau, Lt-Colonel at the SDIS86 in the Vienne Department, Poitiers (France), has also closely followed the collaboration with Euro NCAP within the Commission.

First of all, ISO standard 17840 defines the standards of the Rescue Sheets and Emergency Response Guides (ERG) drawn up for each vehicle (cars, trucks, ...). Furthermore, this standard also includes a number of symbols indicating the vehicle’s type of engine (electric, hybrid, ...) so that the emergency services know how to proceed appropriately when faced with an accident involving for instance an electric bus. In October 2018, the KCCE organized in Brussels a conference on ISO standard 17840, in the presence of Belgian but also international participants.   Firefighter Kurt Vollmacher, from the Fire & Rescue Region “Centrum”, was the project leader for ISO within the Commission.

More information regarding this ISO standard is to be found on : https://www.ctif.org/index.php/commissions-and-groups/ctif-iso-17840

It can therefore be said that launching the "Rescue Sheets" database is one of the ways of putting into practice this standard. The launch is in addition to introducing the standard into the trainings for firefighters and also to the stickers with the above-mentioned symbols pasted for instance onto trams and buses used for public transport as well as already onto the fire brigade vehicles in certain rescue zones.