Since the Second World War, the Civil Protection has evolved in line with society's needs in order to be able to support the population. The last major reform was carried out on 1 January 2019 with the aim of specialising its missions and strengthening its place in the aid chain so that the Civil Protection will also be able to face new risks such as terrorism and climate change. Our experts continue to carry out their tasks with innovative techniques and new equipment in order to make a complementary contribution to the other emergency services.

Reform of the Civil Protection 2.0

The Civil Protection was reformed on 1 January 2019 with the aim of becoming a more specialised, efficient and modern emergency service. It is recognised for its complementary expertise within the Civil Security at two levels: The Civil Protection at federal level and the emergency rescue zones at local level.

The operational units are centralised in two operational units: one in Crisnée and one in Brasschaat. These expertise centres complement each other effectively for specialised tasks that are complementary to those of the other emergency services.

A more interesting administrative and financial status has been created for the staff.

Creation of the Civil Protection 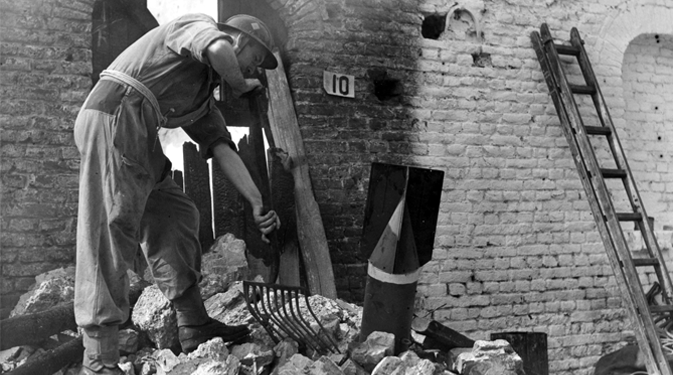 on for Passive Air Defense of the Population and the Civil Institutions, the precursor of the Civil Protection, was founded in 1934 by the Belgian government to protect the population against military attacks. Actively defending civilians was a task of the army, but the municipal and urban committees of the Passive Air Defense had to warn the citizens, deliver first aid and clean up the rubble after bombardments. The service organised rescue operations in Antwerp and Liège after the hits of V1 and V2 bombs at the end of 1944.

In 1945 the Passive Air Defense was transformed into a National Aid Corps (NAC) with its headquarters in the Parc du Cinquantenaire. They used material from the Allies (including American trucks, English pumps and small French and Belgian materials). For the first time, professional staff were recruited. 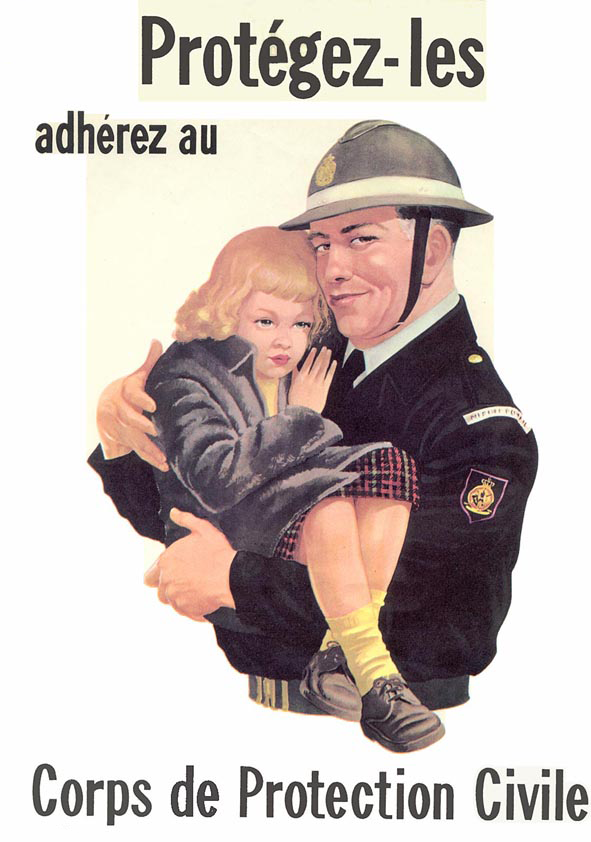 In 1951, the National Aid Corps was transformed into the Civil Protection Corps with its own status, which was laid down in the Royal Decree of 11 March 1954. In Lissewege and Le Roeulx, "Great Guards" were established with their own equipment and personnel and in Liedekerke, Ghlin and Crisnée depots were built for equipment and vehicles. In 1957 a fourth depot was built in Brasschaat.

In 1959 the military headquarters in the Parc du Cinquantenaire made way for the army museum. The four old depots - Liedekerke, Ghlin, Crisnée and Brasschaat - were given more autonomy and became operational units from 1960 onwards. In 1988, a unit was installed in Jabbeke.

In 2006, the department moved from Neufchâteau to Libramont. Since then there were six operational units until 2018:
​ Liedekerke, Ghlin, Crisnée, Brasschaat, Libramont and Liedekerke. Since the 1960s, disasters, risks and emergency situations have evolved as a result of technological developments. The Civil Protection has evolved with that change by focusing on chemical, biological and nuclear risks.

The Civil Protection provided first aid and support for earthquakes in Turkey in 1999, after which the government set up a support service called B-FAST (Belgian First Aid and Support) that is supported by various departments (Home Affairs, Defence, Public Health, Foreign Affairs, Development Cooperation), coordinated by Foreign Affairs. Since 2003, the Civil Protection has been supplying personnel and equipment used in the context of B-FAST operations. This was the case, for example, with the tsunami in Southeast Asia in 2005, the earthquake in China in 2008, the earthquake in Haiti in 2010, the floods in Romania in 2010, the floods in Bosnia-Herzegovina in 2014 and Hurricane Maria in Dominica (a Caribbean island) in 2017.